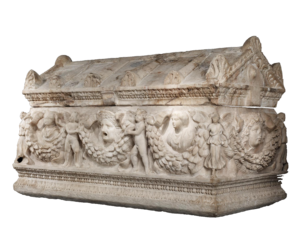 Sometimes you just find a cool concept, and run with it. literally. Reliquary Race is about pushing an annoying artifact through a series of increasingly bizarre rooms, with surprising – or just crazy dangerous – twists. It focuses on testing the players’ tactical skills, and absolutely nothing else.

Reliquary Race is a tactics-focused adventure for four to five characters of level 5, during which the party must try to push a heavy reliquary through several rooms of an old temple, while taking care of its temperamental demands.

It is recommended to play this entire adventure as if it were a single encounter: turn-by-turn and round-by-round, with no time to rest!

A one-session adventure suitable for most campaigns and as a one-shot. Includes a new annoying but powerful relic, a sinister new trap, and maps for VTT.